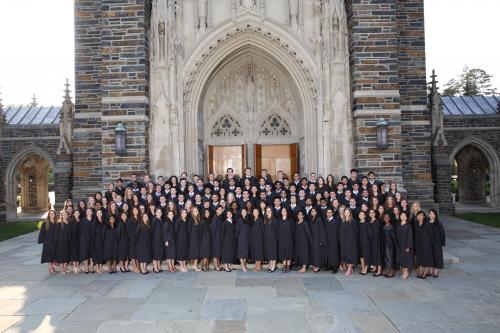 Housed within OUSF are a variety of programs Duke University that encourage academic engagement among students. Students come from diverse backgrounds and have widely differing academic and professional goals, but are united in their desire to engage with intellectual communities during their time at Duke. Affiliated programs include women's learning and housing communities, faculty lecture series, scholarly opportunities for future health professionals, and research initiatives.

Inspiring and supporting undergraduate women to become engaged, confident and connected leaders in the Duke community and beyond

The four-year experience includes a retreat, two academic seminars, an opportunity to live together as a group on West Campus, an internship, and numerous informal activities such as lectures and dinners. Baldwin Scholars will develop leadership, critical thinking and problem-solving skills. The program is open to students in the Trinity College of Arts & Sciences and the Pratt School of Engineering.

More about the Baldwin Scholars

The Cardea Fellows Program is for high achieving students who are committed to preparing for a profession in health care by mastering core knowledge in math and science. Every undergraduate admitted to Duke has demonstrated academic excellence, yet some students may not have had the opportunity to develop a foundation in science and math that will accelerate them toward their professional goals. The Cardea Fellows Program is designed to enhance the competitive success of high performing students by forming a learning community to help establish a critical foundation in the natural sciences for each fellow.

More about the Cardea Fellows

The Mellon Mays Undergraduate Fellowship (MMUF) program aims to create a legacy of engaged fellows who will provide opportunities for all students to experience and learn from the perspectives of diverse faculty members. Established in 1988, MMUF works to achieve its mission by identifying and supporting students of great promise and helping them to become scholars of the highest distinction. The name of the program honors Dr. Benjamin E. Mays, the noted African American educator, statesman, minister, and former president of Morehouse College.

More about the Mellon Mays Fellows

The abridged history of our chapter, presented below, is taken from Carl L. Anderson's history of Phi Beta Kappa at Duke. This work was written in 1977 and revised in 1978, 1980, and 1988. "The Duke chapter, Beta of North Carolina, was formed in 1920 at Trinity College, Durham, on the application of eight faculty members who has been inducted into membership while they were students at other institutions. The statement prepared in support of Trinity's application was pleased to point out that the college had no fewer than eleven buildings, including a library of 54,000 volumes staffed by six librarians.

"To meet the requirement that alumni of the College included persons who had attained great distinction, the charter application named United States Senators and Congressmen, college presidents, and others, including John Spencer Bassett, Professor of History in Trinity College. Basset had been the center of a celebrated controversy at Trinity in 1903 that led to one of the earliest affirmations of academic freedom by the trustees of an American institution of learning..."

The Rachel Carson Scholars Program provides Duke University undergraduate students with direct research experience in marine science and conservation. Named in honor of Rachel Carson—a marine biologist, author, and conservationist whose work advanced the global environmental movement—scholars will acquire the necessary skills to be the next generation of marine conservation leaders.

Scholars are trained through small seminar experiences, experiential learning, enhanced faculty-student mentorship, scientific research, and professional development. All scholars spend at least one semester at the Duke University Marine Laboratory (DUML) and have funding available for research, travel to professional conferences, and DUML travel courses. In addition to the training that they receive, a community of scholars will be developed both within each cohort of scholars and among alumni of the program.

More about the Rachel Carson Scholars